Are You Ready for the Big Hole Salmonfly Hatch? 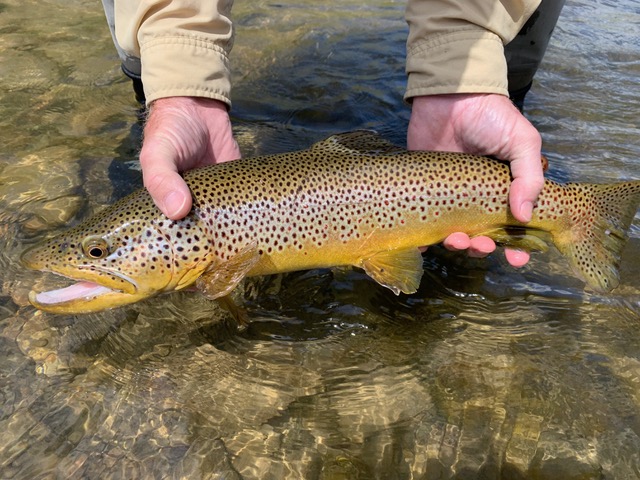 It’s that time of year again. June is here and that means salmonflies are on the horizon. While the first week of June does not necessarily see a great number of adults, the nymphs are surely migrating and that vulnerability offers a major food resource for fish. It’s time to stock up your fly boxes with big bugs because things are about to go wild.

Fish Ahead of the Hatch

Early June is a good time to focus on the nymphs. The fish are close to shore as the stoneflies crawl through riffles in their migration to dry land. Once they emerge on land, they will transform into adults and begin flying (and crashing on the water). Fishing the early hatch from a boat is effective because you can cast into the shore. Wade anglers should take a few steps back, avoid casting shadows on the water and work from the shoreline outward. The Big Hole often has a tea color in the early season and brown trout are especially adept at hiding in only a few inches of water.

Big nymphs like a rubberlegs, bitch creek or a bugger with rubber legs will do the trick. It still pays to trail a smaller fly like a caddis larva as they are also abundant during June. Fishing under an indicator is effective but you might feel more grabs while high stick nymphing.

Deciding when to run a big dry fly is always a guessing game. You might only see a few bugs in the air but that doesn’t mean the fish aren’t looking for a meal on the surface. Experiment with the dry throughout the day in various sizes. Sometimes, they actually prefer a smaller imitation that rides low over the big foam flies. You can always run a short dropper and fish tight to the banks as well. If it’s not happening on top, the dropper should get the job done. Bugs in the air are also only one indication of the hatch. Go ahead and shake some bushes along the banks for a status update. You might find more adults than expected.

General Timing and Approach to Salmonflies on the Big Hole River