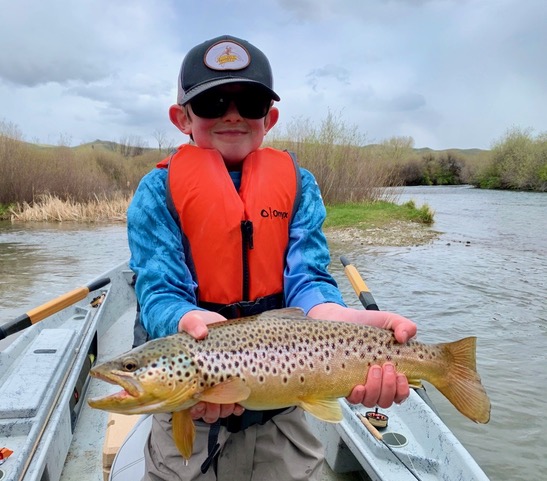 Dillon sits in an arid ranching valley in Southwest, Montana. The weather has sudden swings during the spring but is relatively stable during summer and fall. Winter weather depends on the year with some surprising mild spells that offer windows of decent fishing between cold systems. Planning a fishing trip is relatively easy but it’s a good idea to understand the season while packing your bags.

Spring - The Most Underrated Fishing Season

Around mid-March, the fishing can really turn on in the area. Spring weather is unpredictable and you might experience mild, even warm weather one hour and be in a frigid blizzard the next. The Big Hole is a spring experience worth exploring however because many of the biggest fish seen all year are caught in March and April. Dead drifting big stonefly nymphs with a San Juan worm or slow stripping streamers can draw strikes from brown trout over 20-inches on many days. Trout over 24-inches are caught in surprising numbers during the spring and the occasional 28-incher shows up in March, April and May as well.

Spring begins to fade in mid-May and the big salmonfly nymphs start migrating towards the shorelines on the Big Hole. Trout are often found hilding right against the shore. The Beaverhead also fishes well throughout May and the section immediately below the dam opens on the third Saturday of the month. Caddis and stoneflies are available in abundance during the early summer months.

As the salmonfly hatch winds down in late June, river flows also stabilize and the summer bugs really begin. Golden stoneflies, yellow sallies, PMD’s, drakes and all kinds of different mayflies begin emerging. The Beaverhead has very cold waters and the bugs are consistent through the entire summer season. Fly fishing the Beaverhead often requires a very technical approach to match teh hatch below the dam and some monster trout are caught on small flies. The grasshoppers of late summer however change that course and bring the fish back into attack mode.

While many rivers in Montana suffer from too much heat in summer, Dillon fly fishing always has the Beaverhead where the water temperatures are stable. This makes Dillon one of the most reliable summer fisheries in the state.

Fall - Gunning for the Big Fish

Hopper action continues into the fall, making a big foam dry fly with a dropper a reliable approach. The small mayflies continue on the Beaverhead and spruce moths arrive on the Big Hole. The spruce moth hatch is exceptional and offers consistent surface action with a simple elk hair caddis pattern.

The rivers around Dillon are known for having some seriously large brown trout and fall means these fish are entering a pre-spawn phase. Fishing streamers can produce some incredible specimens during this season. Guides are worth their weight in gold when rowing a drift boat and holding perfect lines along the banks while anglers cast and retrieve streamers.

The weather typically starts changing to winter patterns in November or December but both of these months can remain mild with plenty of opportunity. Timing is everything during the winter months. January and February are often the coldest and least productive months but the spring fishing can turn on again in March so be ready to start targeting bigger fish in that early window. Winter months mean cold water so plan on dead drifting flies through the slowest sections of water. Anything with spring influence will have better chances to produce as the water temperatures are more stable.