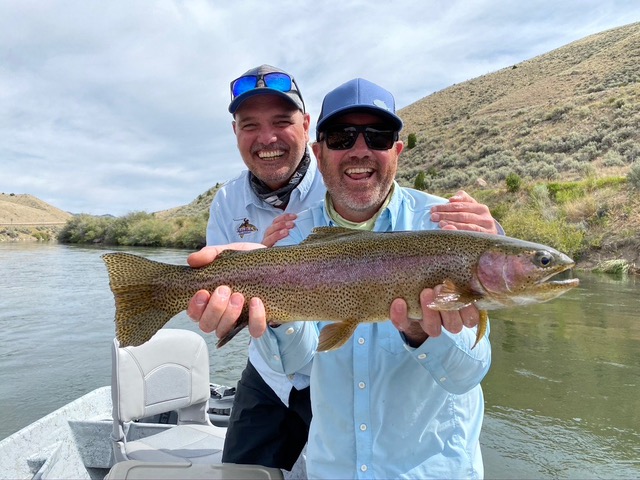 Our guides are on the water day in and out and have refined their approach to fly selection. The flies used vary by season and even by the day depending on weather and observations made in the field. That said, there are some flies that always present themselves as great options in southwest Montana. These are some of our most reliable bugs throughout the year. Stop in the shop before hitting the water and we are happy to share the latest and greatest bugs that are working for our crew.

The seasons have a major impact on dry fly selection. April and May call for relatively small dries to imitate the baetis and midge hatches while early summer requires bigger foam bugs for the salmon flies and golden stoneflies. Craneflies and PMD’s are both prominent regional hatches as well.

Elk Hair Caddis - You will need these for the Mother’s Day caddis on both the Beaverhead and Big Hole Rivers. Caddis hatches remain steady throughout the summer evenings and the spruce moths begin later in the summer and early fall. Use a yellow body version and it also covers yellow sallies. You really can’t go wrong with this classic fly.

Purple Haze - The ultimate parachute that can produce during everything from baetis to PMD hatches. If there are mayflies around, this bug gets the job done. Also works well as a general attractor between hatches. Opting for a classic parachute Adams is also effective for baetis hatches.

Comparaduns - The large variety of mayflies and selective feeding habits in certain areas call for a specialized pattern like the comparadun. When trout are slowly sipping emergers and cripples from the film, match the color of the naturals and five this pattern a try.

Morrish Hopper - Hopper season is serious business in Southwest Montana. The Beaverhead is hopper heaven and this narrow body foam fly is a favorite choice. It rides low and flat out performs.

Hare’s Ear - Old school but it works well throughout the year. A bird’s nest is also a great option. Both work well to imitate the large variety of mayfly nymphs found in our rivers.

Lightning Bug - Flashy little lightning bugs are deadly throughout the spring, summer and fall. They are excellent when fished as a trailer behind a bigger nymph or as a dropper off a dry fly. Silver, red, purple and various colors are all effective. They work especially well at the head of a hatch.

Pat’s Rubber Legs - Spring, early summer and fall months often call for dead drifted stonefly patterns and this one is a consistent producer. It’s simple and has produced some incredible fish over the years. Dead drift these early in the season on the Big Hole and anything is possible.

Sow bugs - This is a deadly approach to fishing the Beaverhead. Pink, olive and gray sow bugs are big producers on this river. Dead drift them along the bottom and hold on tight.

San Juan Worm - Spring on the Big Hole is often approached with a dead drifted bugger and San Juan worm. The combination is a consistent producer and anglers should always have a few of these in their boxes.

Prince Nymph - Like the Hare’s ear, this fly has been catching fish for eons. We start with big ones in the spring and gradually size down throughout the season. A pheasant tail or flashback pheasant tail will also do the trick.

Buggers - You can’t beat a bugger for versatility. Dead drift or retrieve buggers and you might hook a big one on any of the local rivers. Dead drifting patterns with rubber legs is a killer spring technichique but they catch fish throughout the entire year.

Muddler - Small fish are a major food source and the classic muddler is the perfect pattern. It darts through the water and draws quick strikes. It also works well for an October caddis pattern in the fall. Don’t underestimate this small streamer because it produces big fish.

Sex Dungeon - Big articulated streamers like this one are deadly for big trout and they are especially productive in the spring and fall. A “Go Big or Go Home” mentality

Sparkle Minnow - Flashy, fast and flat out deadly on all of our rivers. When the hatches are in a lull, throw on a sparkle minnow and head out prospecting. It’s amazing what you can move on this pattern.

Sculpzilla - This sculpin imitation has great action and a slender profile. It’s excellent for the Beaverhead where you’ll cast into tight corners and swim the fly through undercut banks and pockets.